“There is good living where there is good beer”… this means that if you add food to the equation, you go from good living to great living. Beer is a great match for food because of the complexity of its flavours. Now more than ever before, there’s a synergy between the beer and food worlds. And to some in the craft beer world, it’s high time restaurateurs recognized the versatility of craft beer in food pairing.

Pecorino di Pienza is one of the best Italian cheeses and at the same time has a long history. In Val d’Orcia (Tuscany) Pecorino Cheese was and is synonymous of good cheese. This tradition has been passed down to the present day with the delicious cheese we now call Pecorino di Pienza. Caseificio Cugusi is one of the best and most famous in the area.

Cugusi’s Pecorino di Pienza Ubriaco is a pure sheep’s milk cheese, matured distinctively: the ageing of this curious cheese takes place in containers filled with Vino Nobile di Montepulciano marc. The crust is covered with grape pomace, and the seasoning can go from 30 to 120 days.

The taste is fruity and prosperous; the aroma is a bouquet of red and black fruits with a hint of earth. On the palate the flavours are mellow at first, and sweet, deepening into edgy notes of spice. I wanted to pair this unique cheese with something from a very different cultural background.

What better than a dark ale made in Denmark? Husbryggeriet Jacobsen is an upscale brand of speciality beers owned by Carlsberg. Named after Carlsberg’s founder, J.C. Jacobsen, it is housed in the original Carlsberg brewery in Valby in Copenhagen, Denmark and is currently headed by brewmaster Morten Ibsen.
I went for Vinterbryg 2019 – Raw Cacao Ale (7.5% ABV), a beer which the recipe changes every year – this year is nutty Winter ale. The body is somewhat creamy with the cacao being quite noticeable in both the aroma and taste, but we still miss more heaviness to it.
Slightly bitter taste hidden behind the cacao could have been a bit more rounded.

This is a refreshing beer, perfect for an intense cheese. I loved how the acidity from the cacao was playing in a duo with the wine character, going deep with my tastebuds. The cheese is less salty than some other Pecorino, so it doesn’t overpower the beer. The light roast and grassy hops pull out the cheese’s tang and funk. The nutty/toffee notes in this beer also make it an excellent match for the nuttiness and fruitiness of this cheese.

The angels sing for me when I taste this combination!!! 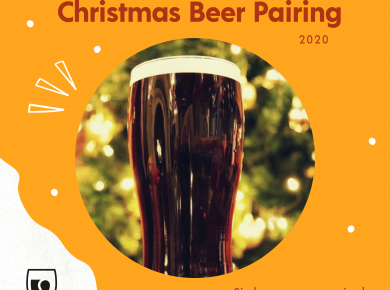 Something has been on our minds for a while now. What beers would pair up nicely with the most memorable meal of the year? So we decided this year’s Christmas…
read more 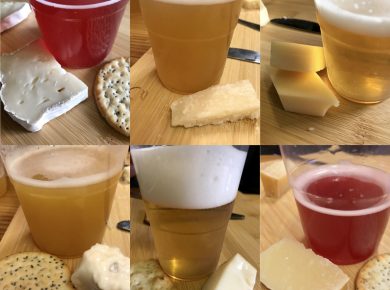 What’s In the Glass? has started to work with ORA Brewing for a series of tutored Craft Beer & Italian Cheese Tasting events in their Tottenham taproom. Gabs Bertucci, our…
read more